I just found out on Twitter that my favorite musican of all time – Andrew McMahon of Something Corporate and Jack’s Mannequin retweeted this article. The article is based on his idea of “West Coast Winter.” Pretty awesome to have your high school hero like what you are doing, especially when what you are doing is writing about psychology. Hear the song that inspired this at the end of this article.

As a Southern Californian native, nonnatives always assume I must be sad every time Christmas rolls around and it’s not white. They tell me that I must feel blue because something “essentially Christmas” or “properly winter” is missing.

As the Southern Californian band Jack’s Mannequin sings: “It’s Christmas in California and it’s hard to ignore that it feels like summer all the time. But I’ll take a West Coast winter to remove my splinters. It’s good to be alive.” 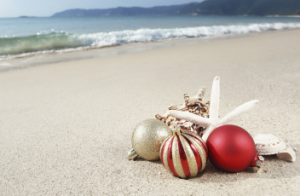 If you moved here you would probably hate this “always summer” feel. You would probably miss the snow and the cold. But we don’t. We don’t dwell on how we are missing out on the typical winter traditions, because winter does not mean the same things to us that it does to you.

For us, winter means putting on a long-sleeve T-shirt and sharing a peppermint flavored frozen yogurt on a sunny patio; or taking a late-night walk on a decorated pier, possibly after a Christmas Eve service with the people we love; or strolling down Disneyland’s Main Street under the artificial (but quite awesome) snow.

If we Southern Californians wanted to, we could drive inland and be in the snow in a few hours or less. But we don’t all migrate inland for the winter. Why? Because that’s not who we are and that’s not what winter or Christmas means to us.

In the winter season, many Californians often even develop what social scientists call an “oppositional identity.” We choose to swim or surf on Christmas Day and we proudly (and sometimes annoyingly) post photos of how beautiful and completely unmiserable it truly is here. In Southern California and the West Coast at large, we develop traditions in opposition to traditional winter norms.

As Californians, we are not claiming our winter is any better or worse than other winters (well, some of us probably are). However, we just claim that a West Coast winter isn’t so bad and actually enjoy it this way.

In general, the world is often jealous of our generally perfect weather. So it is understandable that the world would like to think that for one season or just one Christmas Day, Southern Californians are the jealous of others’ weather. But the truth is, were are not jealous.

When West Coasters are on the beach, with a new pair of Rainbow sandals fresh from the San Clemente outlet, a board in their hand, and In-n-Out Burger in their other hand, watching a pelican fly over the Christmas lights on the pier, it doesn’t feel like the moment is missing anything! In fact, for a Southern Californian native, a moment like this could not any feel more complete.

For research that inspired this article check out the topics of “perspective taking” and “oppositional identity.”